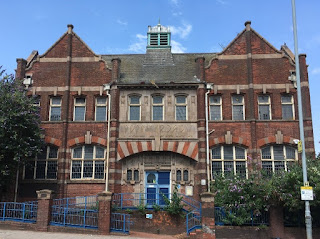 CP4SO is committed to saving and restoring the old Selly Oak Library, and then to finding new public uses for it.

Funded by Andrew Carnegie, the Library was designed by John Osborne, a Birmingham architect, and opened in 1905. In 2011, Historic England designated it as a Grade II listed building in recognition of its architectural quality, its good state of preservation, and its importance as part of the “civic nucleus of Selly Oak”. Sadly for the local community, Birmingham City Council closed it as a functioning library in 2018. However, CP4SO is now working on the idea suggested by Historic England that it should be restored to its role at the heart of Selly Oak’s civic quarter.

Other neighbouring listed buildings are the Selly Oak Institute, the water pumping station, and two houses on Bristol Road which were originally for the families of the pumping station’s engineers. Of these buildings, only the Library remains in the ownership of the city council. This gives CP4SO confidence that our efforts to restore the building and find new uses of benefit to the community will receive the city council’s support.

CP4SO applied to the National Lottery Community Fund for a grant to pay for a professional assessment of the feasibility of restoring the Library building and finding a new community use for it. We heard in March 2019 that we had won the grant of £10,000 and we contracted Apec Architects Limited, directed by Naomi Fisher. Pending their full assessment, Apec have informed us that, though the building is in a fairly poor state, there are no fundamental problems and the building should be suitable for a variety of public uses.You can view a 3D fly-through of the Library here.

Apec Architects have undertaken consultations with possible users and they presented ideas for comment to CP4SO’s Annual General Meeting on 18th June 2019. Our expectation is that this will lay the basis for a further grant to enable us to undertake the restoration.