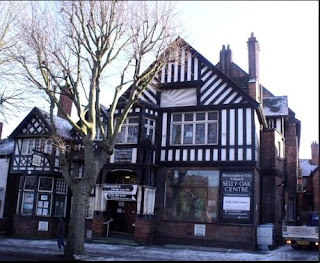 Originally known as the Friends Institute, what we now know as the Selly Oak Institute (or Selly Oak Centre) was built in 1894 by George Cadbury as a meeting place for Quakers, an adult school, and a recreational centre for local residents. The building was gifted to the ward for educational use, and remained in Birmingham City Council’s ownership until 2012 when it was sold to a private purchaser.

This is one of five historic buildings that CP4SO is determined to defend as being at the heart of Selly Oak’s civic quarter. When the city council advertised the sale the building for sale, its proposed use was for education or community uses – in recognition of George Cadbury’s wishes. The Institute is protected by the fact that in 1982 Historic England designated it a Grade II listed building (Ref. 1343339). It is also covered by two restrictive covenants (i) not to allow any religion (other than in the discretion of the Society of Friends) to have the exclusive use of the land and premises, and (ii) not to allow the sale of alcohol on the premises.

The building is currently unused, but in sound condition.  In 2014 the Council resisted a scheme for student accommodation by the new owner. This decision was challenged under an appeal, but the decision was upheld by the Planning Inspectorate in 2015.  In 2019, CP4SO objected to two planning applications by the owner: the first, for the temporary use of the building for furniture sales, was approved; we await the council’s decision on the second application to construct a five bedroom house in multiple occupancy within the building.

CP4SO has declared its willingness to work with the owner to find suitable community uses for the building and to help to raise grant-funding for its restoration.